I left home at about 2:45 a.m. yesterday to get to Sleeping Bear Dunes National Lakeshore at least an hour before dawn.  I wanted a little extra time, since I hadn’t planned where I was going to set up.  The weather forecast called for partially cloudy skies.  When I arrived at Glen Haven, the morning sky was a dark as could be. It became clear that there would be no colorful sunrise.  The only question was whether the clouds would be at all interesting.  I decided to set up on Good Harbor Bay.  If the sky was dull, I could always go in close at Shalda Creek or try for a woodlands shot along the Good Harbor Bay Trail.

To my great pleasure, when the sun came up (behind the clouds), the clouds revealed a moody structure and the driftwood on the beach made for foreground interest.

This driftwood sits in Shalda Creek as it approaches Good Harbor Bay in the background. 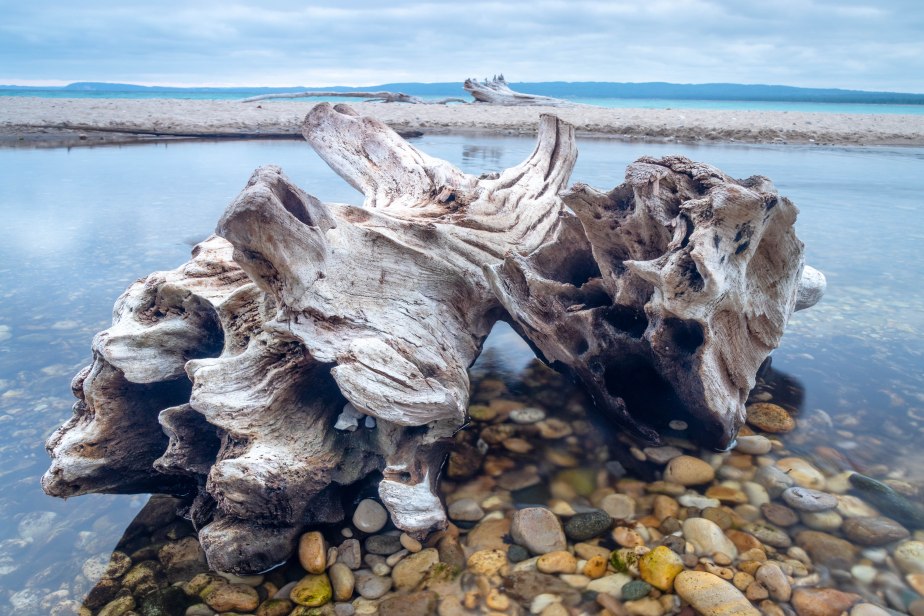 After grabbing breakfast at Art’s Tavern in Glen Arbor, I returned to Good Harbor Bay to hike the Good Harbor Bay Trail.  The trail is an easy 2.8 miles, with no elevation gain.  The trail is interesting as the varieties of trees keeps changing along the way.  I was looking for a good woodlands shot, but finding order in the chaos of a forest isn’t as easy as you might think.  I finally decided to take a few shots of the trail itself. 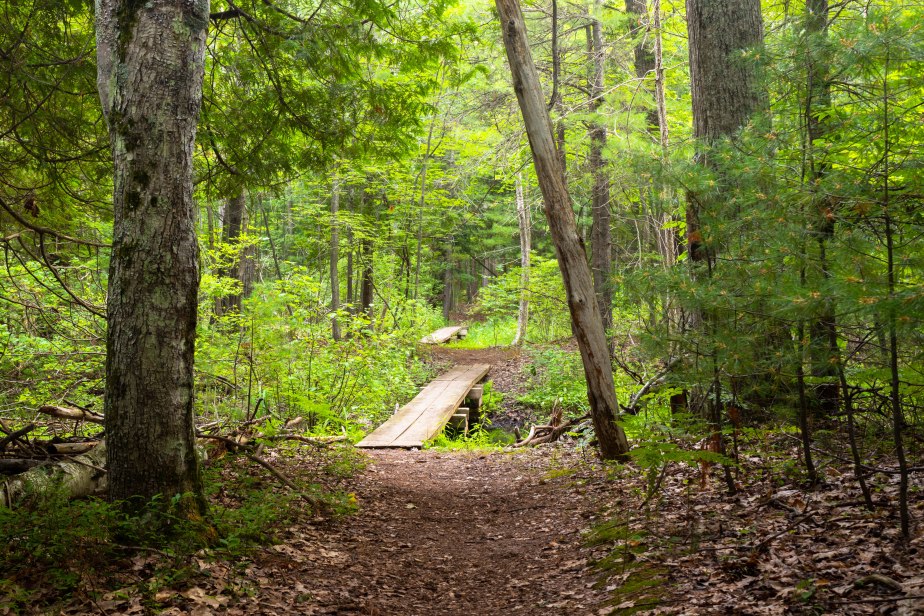 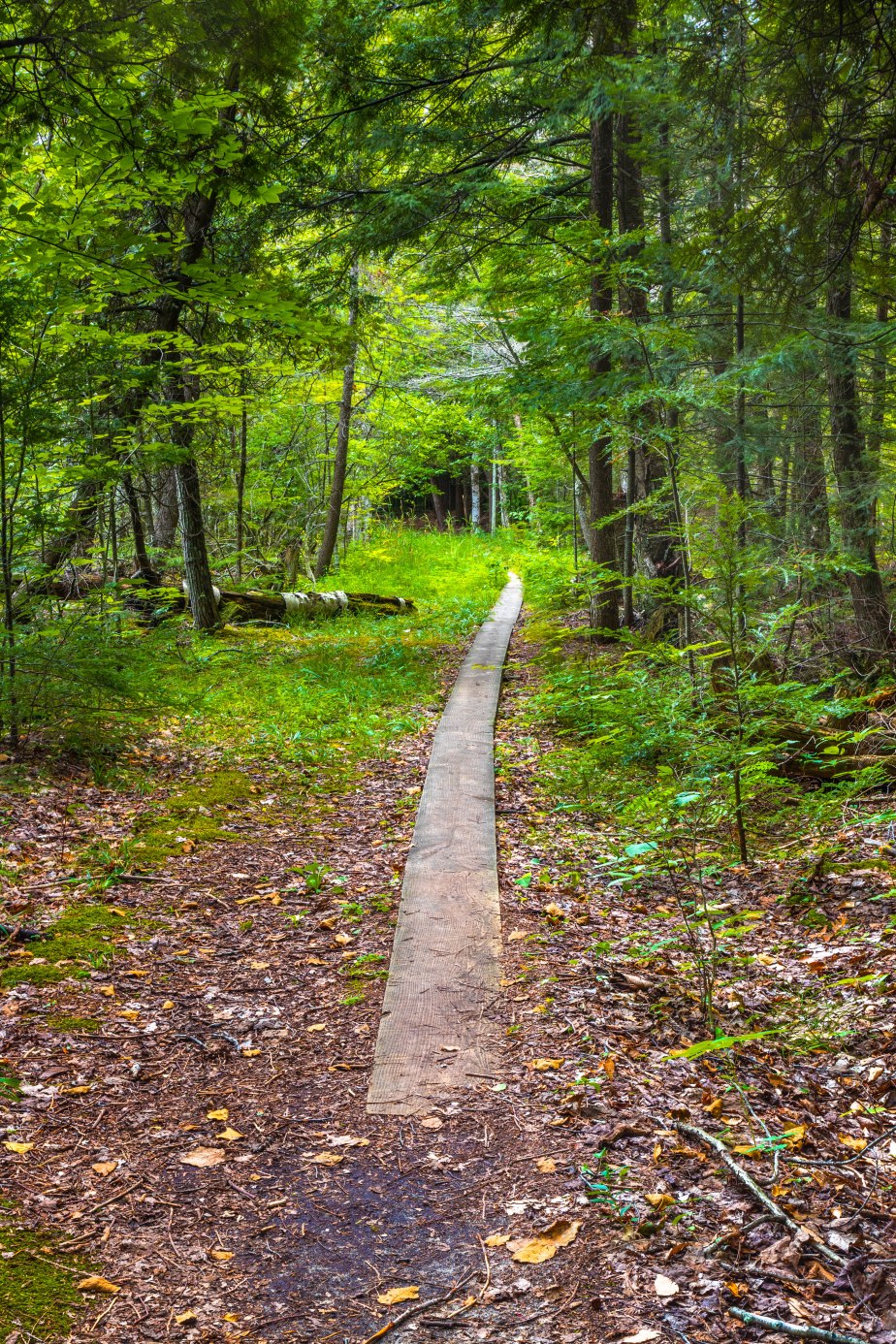 Before leaving Sleeping Bear Dunes National Lakeshore, I stopped by the Point Oneida farm district.  I like this stand of birches that have been drowned by the expanding wetlands the beavers have created in the area.  I thought I would try shooting it in black-and-white.

Driving home on the Benzonia Trail (Benzie County Road 677), I was this scene just north of Fowler Road.  I did a quick u-turn to catch these shots. Can’t decide whether I like the photo better in landscape or portrait mode. 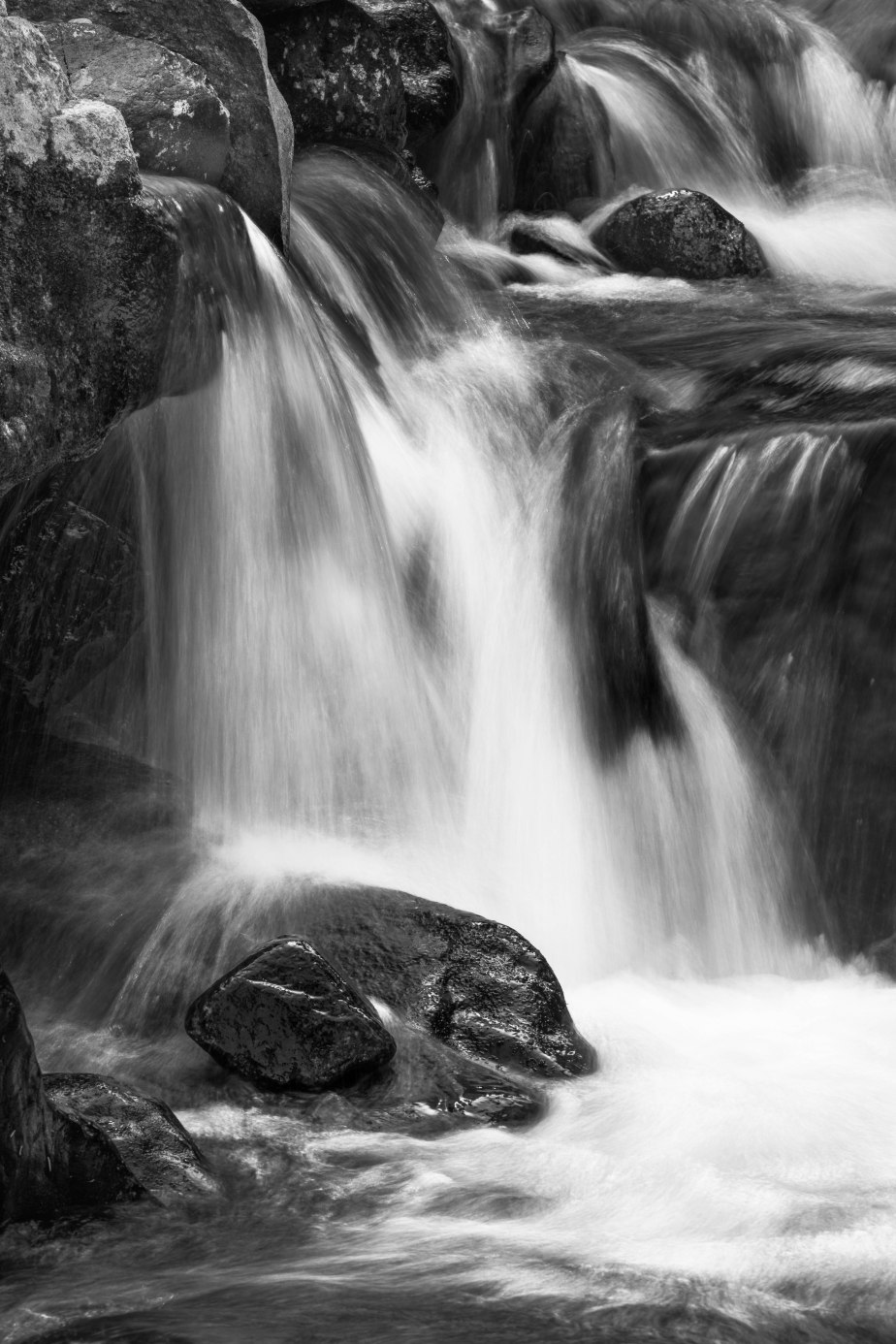 I hiked the Wild Basin Trail in Rocky Mountain National Park on Friday. I hiked to the Calypso Cascades, a round trip hike of 3.6 miles with a 700 foot elevation gain.

Just three tenths of a mile from the trailhead, a hiker is rewarded with views of lower and upper Copeland Falls. 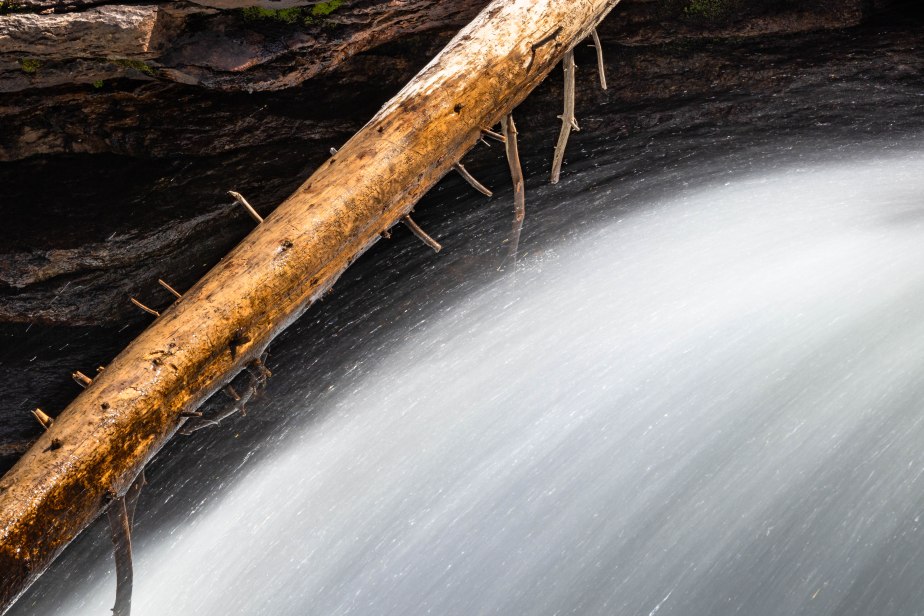 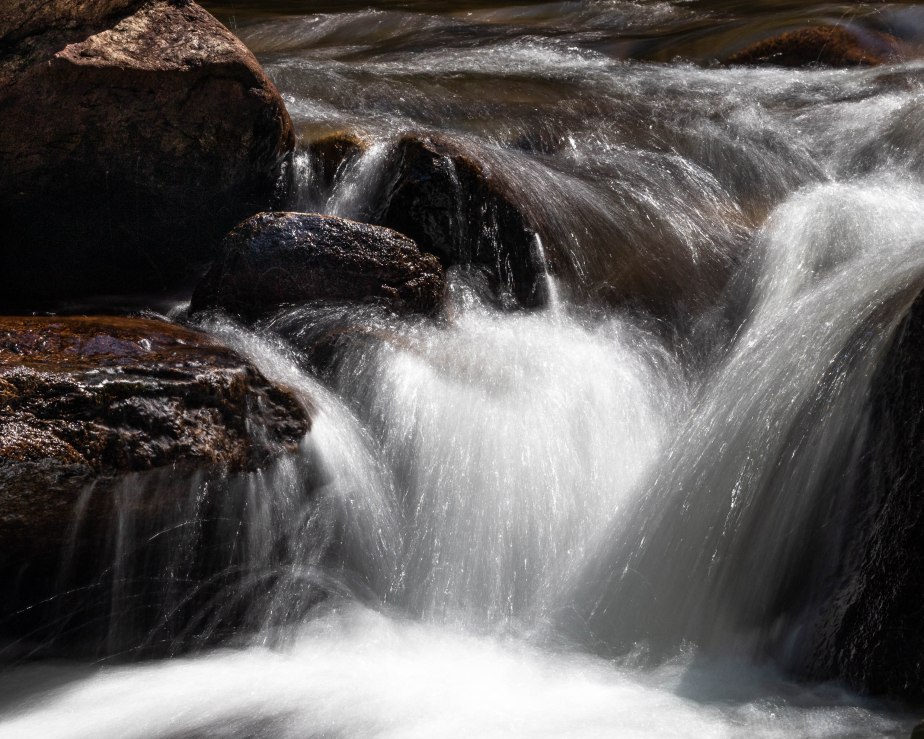 Hiking along North Saint Vrain Creek, the sound of rushing water accompanied me most of the way.

Another mile up the trail from the Copeland Falls, the Wild Basin Trail Crosses North Saint Vrain Creek. 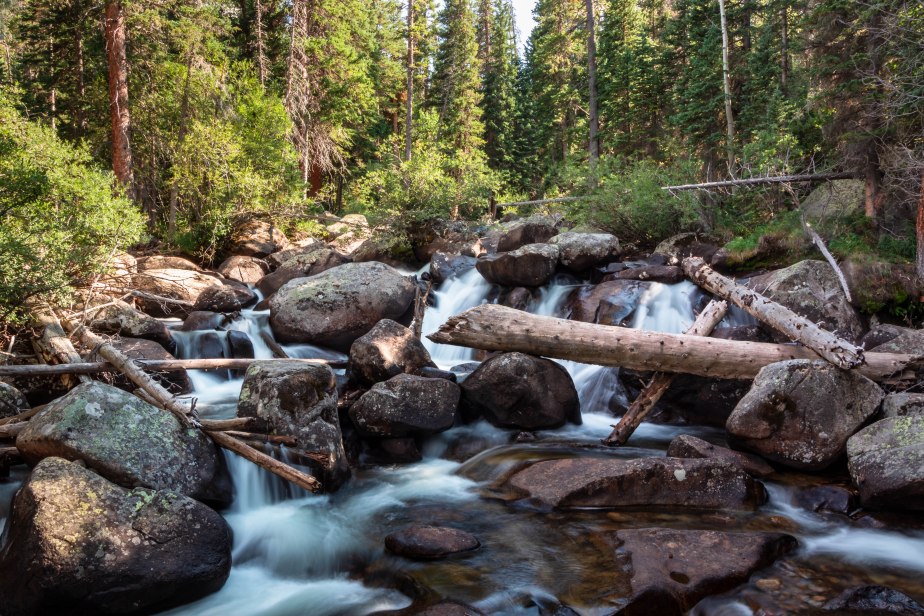 The Calypso Cascades are another three tents of a mile up the mountain. The flow was down this time of year, but the falls are still a spectacular view. 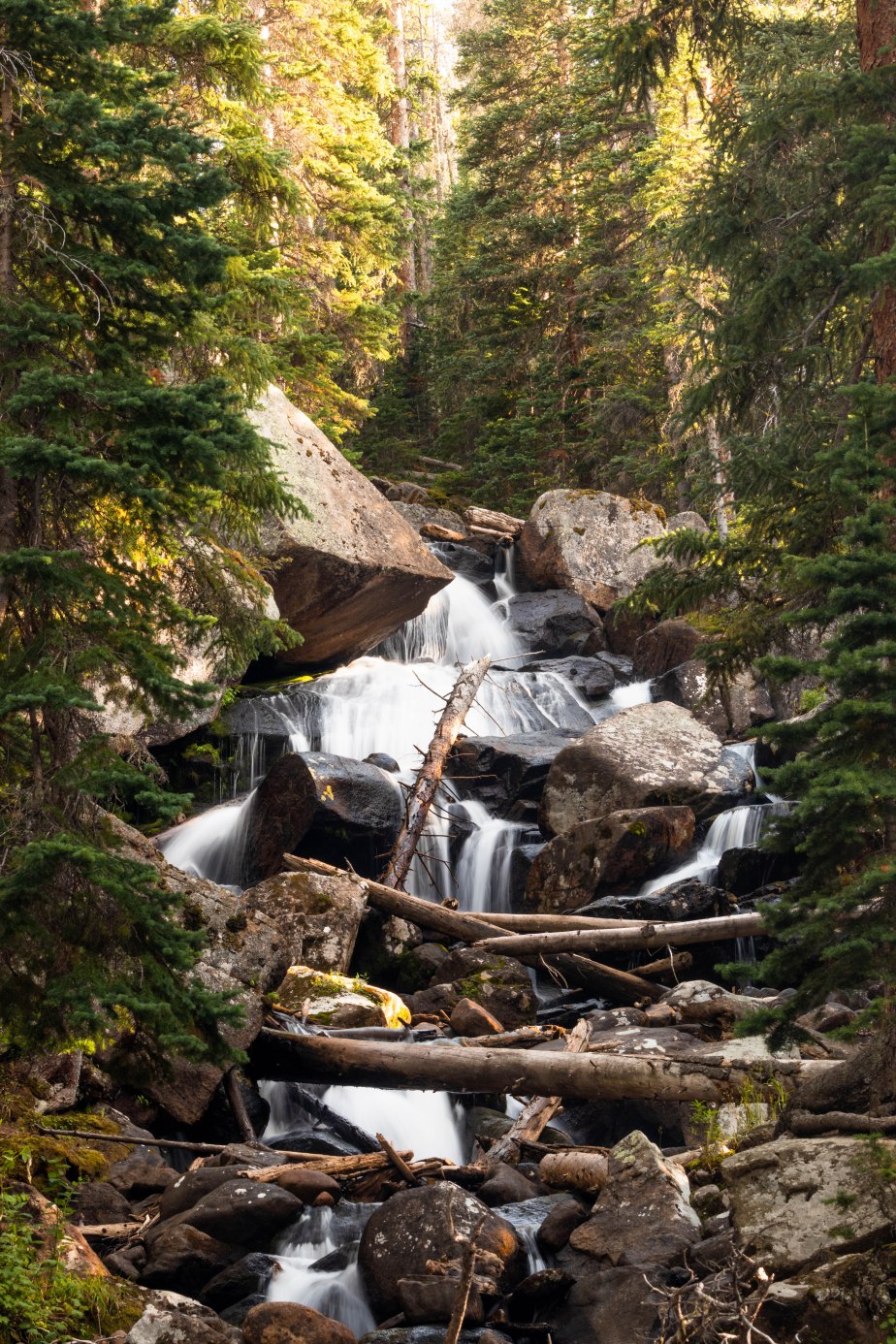 Ouzel Falls are another nine tenths of a mile up the trail with additional gain of 250 feet. I had originally hoped to get to Ouzel, but daylight and my water supply were getting low.  Perhaps another day.